Congress has approved, with the votes of the PP and criticism of all opposition parties, loans approved by the government to pay 1,782 million accumulated debt with the defense industry, a “strategic element national security, “according to the defense minister, Pedro Moreno.

With 176 votes in favor (PP and MP UPN), 151 against and no abstentions, the plenary of the Congress has validated the Royal Decree, approved by the Government on 7 September, granting a defense 1,782;770,890 euros total accumulated debt deal with its suppliers in 2010 and 2011, as well as payment commitments not provided for in the 2012 budget of the Ministry. 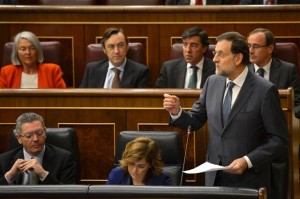 Moreno stressed that the government “neither can nor wants to” avoid payments accrued and stated that this credit is “a first step” to settle debts, “set the counter to zero” sit down and negotiate with industry on Defense pending payments.

The accumulated unpaid special weapons defense programs exceed 30,000 million euros in 2025, of which 1,782 have faced this year.

After stressing that the government must pay its debts for “accountability and credibility,” the minister said not to do it is to discredit Spain and penalties.

In addition, failure to have “mortally threatened” the defense sector with over 500 companies, about 80,000 jobs and a turnover of over 6,100 million euros.

The “fair” fee is “committed to the defense of the Spanish industry”, a “strategic element of national security,” stressed the minister.

One thought on “Spain Congress approves 2,000 million € for defense”